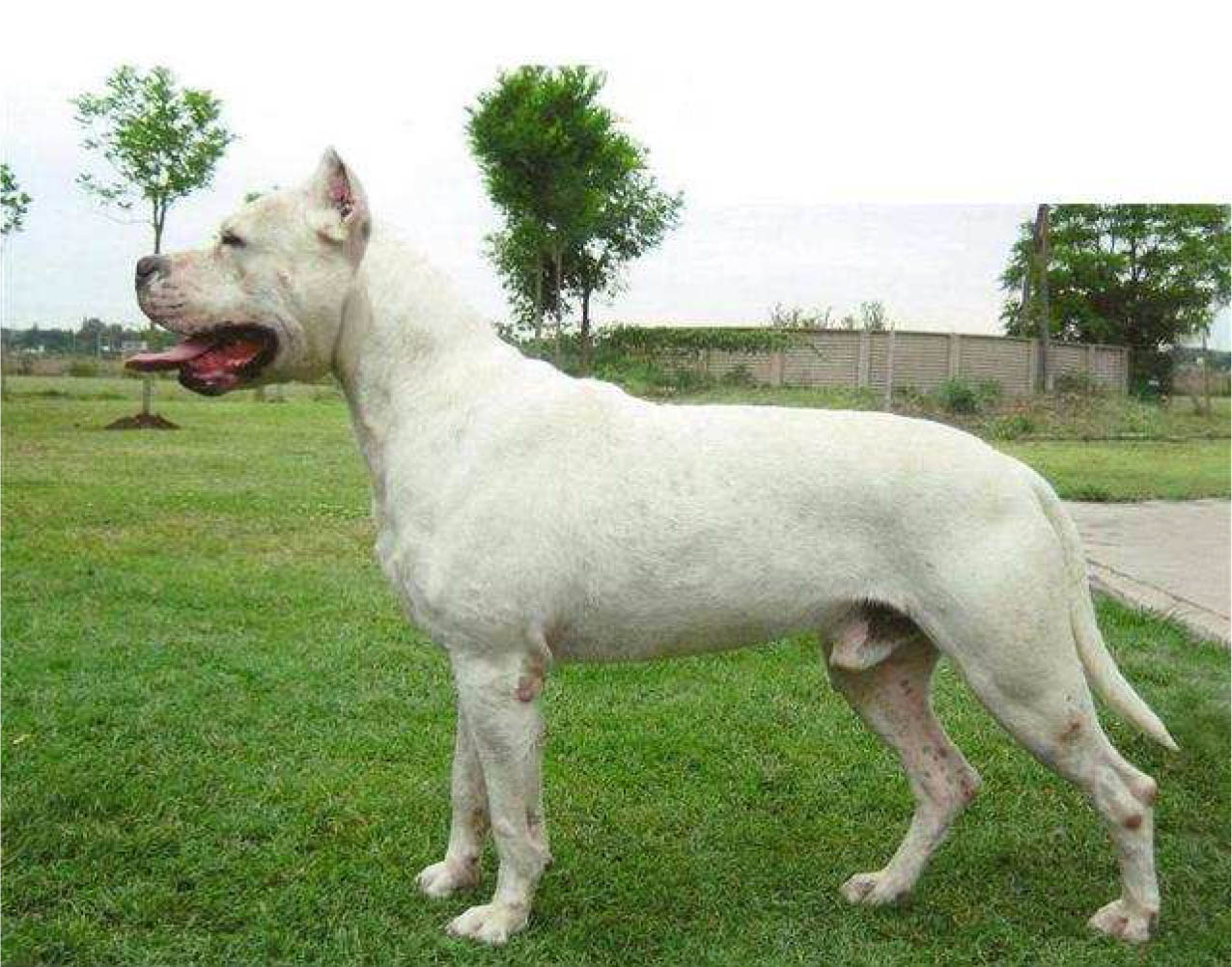 BRIEF HISTORICAL SUMMARY : This breed is native to the province of Cordoba, in the Mediterranean region of Argentina. Its creator was Dr. Antonio Nores Martinez, a prominent and active surgeon (1907 – 1956). His work was based upon the methodical crossbreeding of the “Old Fighting Dog of Cordoba”, a breed of great power and strength, which was the product of crossbreeding among dog of the breeds Bulldogs and Bull Terriers. He selected completely white dogs for breeding, not undershot, with heavy heads and long muzzle. After a thorough and minute character study and selection, through different generations, his aim was accomplished for ming different families always using as a start the Old Fighting Dog of Cordoba which was crossed at first with English Bull Dog, Great Dane, Pyrenean Mastiff, Bull Terrier, Boxer, Pointer, Dogue de Bordeaux and Irish Wolfhound.

In 1947 the breed was already created and its genotype and phenotype were stabilized. The same year the breed standard was presented at the Hunter’s Club in the City of Buenos Aires. Its strength, tenacity, sense of smell and bravery make it the best in the pack of dogs to hunt wild boars, peccaries, pumas and other predators of agriculture and livestock that inhabit the vast and diverse regions of Argentina. This is the tradition al activity for which Antonio Nores created this breed.
In 1964 it was recognized as a breed by the FCA (Federación Cinologica Argentina) and the Sociedad Rural Argentina, which opened their studbook to initiate registry.
Just in 1973 the breed was accepted by the FCI. Thi s was possible thanks to the great passion and unique work and effort of Dr. Agustín Nores Martínez, brother of the founder of the breed, who achieved this recognition not only because of his individual actions but also from the institutional action of the FCA and the Dogo Argentino Club “Dr. Antonio Nores Martinez”.

GENERAL APPEARANCE : It is an athletic dog, mesomorphic, normal type, of harmonious proportions. With powerful muscles and agile, his appearance gives the impression of power , energy and strength, in contrast to its expression of friendship and gentleness.
All-white; can have a single dark spot on the skull .

BEHAVIOUR AND TEMPERAMENT : It should be silent, never barking on the trail, with a keen nose and excellen t flair, vent, agile, strong, robust and especially brave.
Should never be aggressive toward humans, a feature that will be severely observed. It must give you love without conditions or reservations.

HEAD : Of mesocephalic type, it looks strong and powerful. The cranio-facial axes are convergent.

CRANIAL REGION:
Skull: Compact, convex seen in profile and from the front due to the outline of the well developed masticatory and neck muscles.
Occiput: Occipital protuberance not visible due to powerful muscles of neck which hide it completely.
Stop: Defined but should not be deep or have sharp/abrupt angles.

FACIAL REGION: As long as the skull, the line joining the two frontal orbital muscles is equidistant from the occiput and the mandibular joint of the upper jaws.
Nose: Strongly Black pigmented. Nostrils well opened.
Muzzle: Same length as the skull, with concave topline.
Lips: Tight, free edges, black pigmented, never pendulous.
Jaws/Teeth: Jaws correctly positioned, well-developed and strong, With no under or overshot, with healthy teeth, large and with normal implant. Full dentition is recommended. Scissor bite, pincer bite is accepted.
Cheeks: Large, marked, covered by strong skin, without folds. Well- developed masseter muscles.
Eyes: Medium size, almond shaped, dark or hazel coloured, lids preferably with black pigmentation. Sub-frontal position, wide apart, lively and intelligent expression but at the same time remarkably firm.
Ears: Set high, lateral, well apart due to the width of the skull. Functionally, they should be cropped and erect, intriangular shape and with a length that should not exceed 50% of the front edge of the auricle of the natural ear. Without being cropped, they are of
medium length, broad, thick, flat and rounded at the tip. Covered with smooth hair which is slightly shorter than on the rest of the body; they can have small spots, not to be pena lized. In natural position they hang down covering the back of the cheeks. When the dog is alert they may be carried semi-erect.

NECK : Thick, arched, the skin of the throat is very thick forming smooth folds without forming dewlap. The elasticity of the skin is due to the cellular tissue being very lax.

BODY : Rectangular. The length of the body (measured from the point of shoulder to point of buttock) may exceed the height at the withers by only 10%.
Top line: Higher at the withers, sloping gently to the croup. The adults have a median furrow along the spine caused by the prominence of the spinal muscles. See from the side should not have any depression.
Withers: Strong, well defined and high.
Back: Very strong, with muscles well defined.
Loins: Short, broad, very muscular.
Croup: Broad and strong. Moderately inclined.
Chest: Broad and deep. Seen from the front and profile, the sternum must reach down to the level of the elbows, thereby giving maximum breathing capacity. The thorax is long with ribs moderately curved.
Underline and Belly: Rising slightly on the bottom line of the chest, never tucked up, strong and with good muscle tension.

TAIL : Long, not to exceed the hock joint, thick medium set. At restit hangs down naturally, in action it is raised in an arc with an ample curve.

LIMBS
FOREQUARTERS:
General appearance: Legs straight, vertical, with short and tight toes.
Shoulders: Laid back, with great muscular development without exaggerations.
Upper arm: Same length as the shoulder; well inclined.
Elbows: Sturdy, covered with a thicker and more elastic skin, without folds or wrinkles. Naturally placed against the chest wall.
Forearm: As long as the upper arm, perpendicular to the ground, straight with strong bone and muscles.

Pastern joint: Broad and in line with the forearm, without bony prominences or skin folds.
Pastern: Rather flat, well boned; seen from the side slightly inclined, without exaggeration.
Front feet: With short and tight-fitting toes. With strong thick and resistant pads, preferably black pigmented.

GAIT / MOVEMENT : Agile and firm; with noticeable modification when showing interest in something, changing into an alert attitude and responding with quick reflexes, typical for this breed. Calm when walking; trot is extended, with good front suspension and powerful rear propulsion. At gallop
, the dog shows all of its energy, fully displaying its power. The movement is agile and firm when walking, trotting or galloping. Should be harmonious and balanced showing a solid body construction. Ambling (pacing) is not accepted and is considered a serious fault.

COAT
Hair: Uniform, short, smooth, with an average length of 1.5 to 2 cm. Density and thickness vary according to climate.
Colour: Entirely white. Only one black or dark-coloured patch on the skull, but which can also be located on one ear or around one eye. The size of the spot must be in proportion to the size of the head, not exceeding 10% of the latter. Comparing two dogs of equal quality, the whiter should be preferred.

FAULTS: Any departure from the foregoing points should be considered a fault and the seriousness with which the fault should be regarded should be in exact proportion to its degree and its effect upon the health and welfare of the dog and its ability to perform its traditional task.

SERIOUS FAULTS:
• Lack of bone and muscle development (weakness).
• Nose partially pigmented in adults specimens.
• Small, weak or unhealthy teeth.
• Entropion, ectropion.
• Eyes of round appearance due to the shape of the eyelids, bulging eyes, light or yellow.
• Barrel chest.
• Keel chest. Flat ribs.
• Lack of depth of chest, which does not reach the level of the elbows.
• Lack of angulation on the limbs.
• Croup higher than withers.
• Ambling movement (pacing).
• Males and females whose weight does not comply with the official valid standard and not in proportion to the size of the dog.

DISQUALIFYING FAULTS:
• Aggressive or overly shy.
• Any dog clearly showing physical or behavioural abnormalities shall be disqualified.
• Over or undershot mouth.
• Deafness.
• Lack of type.
• Long hair.
• Total lack of pigmentation of the nose in dogs aged 2 years or more.
• Brown nose.
• Pendulous lips.
• Spots on the hair of the body.
• More than one spot on the head.
• Height above or below the limits established in the standard.
• Eyes of different colour or blue.
• Lack of sexual dimorphism.

N.B.:
• Male animals should have two apparently normal testicles fully descended into the scrotum.
• Only functionally and clinically healthy dogs, with breed typical conformation should be used for breeding.